With the balloons popped, the music attenuated and the goodbyes done with (excepting one), I found myself at the dawn of the day that I would be going to Japan. A good friend offered a lift to the airport and this was almost my undoing, haha. My friend had an unfortunate locking of the keys in the house incident leading up to check-in time!! A quick scramble however had me making alternate arrangements and all was peachy again.

I met up with a lot of my fellow JETs at the Brisbane domestic (we had to go to Sydney first-blehh let's travel away from our final destination first-woot!) and I got to meet boyfriends, mums, dads, friends et al. which was kinda heartwarming. I enjoyed seeing the spark of pride in the eyes of the dads and the mums of the other JETs. At check-in time I said my final goodbye :(

Before long we were descending into the metropolis of Tokyo. On descent a flood of memories 2 years past came back to me. I remember my first descent into this wonderful city. It was night and the vastness of the lights was mesmerising. The seemingly endless scale of construction was a little scary. How could they power all these cells of humanity and industry? Seeing the vast residential sprawl on my first train ride from Narita to Tokyo reinforced the scale of life in the metropolis that holds roughly the same population as that of my home country of Australia.

Anyway, I digressed didn't I? This time around, I was greeted with a hot and humid Narita morning. After we got our luggage, a good Brisbane JET friend of mine, 'Mie L', and I finally met 'Aichi P', a friend that we made through the forums. He gave us each a 扇子/sensu (Japanese folding fan), which was an awesome welcoming gift that we put to use pretty darn promptly. Mie L and I boarded the bus bound for swanky Keio Plaza. The reality of being in Japan really started to hit on this bus ride. The alien boxy cars, the architectured roadside 緑/midori, the abundant baseball fields, the unfamiliar plantlife, and of course, the signage in asian characters, all together made it sink in. 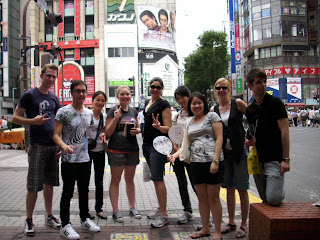 We got to the hotel and almost everywhere we went there was a smiling Tokyo Orientation Assistant pointing us in the right direction. It felt very heartening to be greeted in such a way by the cornucopia of friendly assistants. After we got settled in, a group of us went out for errands, shopping and lunch. I got a small suitcase to replace my massive carry-on eco bag which had thoroughly 'exploded' by that point in the journey. Lunch at さら福や, Shinjuku was a little bit spectacular. I had a set meal (定食) of Okhosｔk Mackerel (ほっけ), tofu, rice, salad, miso soup, some delicious seaweed thing and a fruit jelly. It was an awesome first meal in Japan. Later that night, we were feeling pretty tired and ended up having a few quiet ones in the hotel. I discovered Asahi Blue label, a brilliant drink. 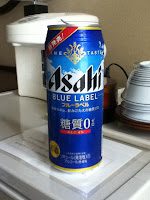 The next day was the start of the business end of the orientation. The opening presentations were very good and the mood, despite being official, was counterbalanced with the humour and occasional anecdotes of the presenters. The same day, I met all my fellow newbie Aichi Prefecture JETs which was great; a mixture of cool people from America, America, & America. Day 3 was full of workshops. The ones that I attended were pretty well done, especially the team teaching and teaching to children with disabilities workshops. That night we got to visit the Australian Embassy in Tokyo. That was a really good time. I actually bit the bullet and talked to the big wigs during meal time. They were really friendly, it was just like talking to anyone I have ever met back home as they certainly retained their laid-back, approachable Australian-ness.

On the final day we packed up, said goodbyes to our fellow Brisbane JET buddies and flew or shinkansen-ed to our respective posts. I finally met my supervisor and another one of my fellow JETs from 'Podunk' (NOTE: in the interest of protecting everyone's privacy I have chosen to not use my region's proper name). The day was spent setting up house, registering for the alien card, bank account etc., and going out to eat with my fellow Podunk JETs.

And so started my Japanese life. So, what of my posting? Well, my area abounds in rice paddies (they are called 'tanbo' / 田んぼ) which to me hold a special charm of their own. I've found myself often riding home at night (if you do the JET program you will surely spend your initial few days/weeks going out to eat and drink) and as I approach my home, the wind often blows through the tanbo making the rice plants dance, and seemingly, whisper to each other. It's really nice. The novelty of the birds and plants that are alien to my Australian eyes, remains strong still. I often see what I am convinced is the same big ol' Japanese crane having a late night fish in the channel near my house. Damn thing scared the jiminy crickets out of me the first time I saw it, but now I get disappointed whenever it isn't there to say 今晩は/goodnight to, haha.

My god, the food is ridiculously good. There is no understating the sheer variety of Japanese cuisine. Just like learning Japanese (or any other language for that matter) is a lifelong practice, the same could almost be said for the discovery of all the regional Japanese cuisines and their variants. I guess I will do a brief food blog later-ish, just showing all the different dishes I have encountered so far. One theme that I really enjoy about Japanese (and pan-asian cuisine really) is the interactivity of meal time. By this I mean the options of the diner/s to cook, flavour, mould, fashion etc. their meal by themselves. From shabu-shabu (しゃぶしゃぶ) through to D.I.Y. takoyaki (たこ焼き), Japanese dining is indeed a fun affair.

So now's a good time to stop this installment. There is definitely a need for a G'day Japan Part 3. Next time I will get more into the specifics of school life and the fun outings I have been indulging in.

Well until then, thanks so much for reading. Much love to friends and family back home and my continued thanks to anyone else that stumbles upon and reads my entries.