What is a Kappa?

Kon nichi wa my fellow Japan junkies. I was thinking that it is high time that I talk about one of this site's mascots, the Kappa. The Kappa is a prominent character in Japanese folklore, being counted as a member of the "lesser" water deities (perhaps lesser in terms of their standing in the deity hierarchy, but certainly not in terms of prominence in both scholarly literature and Japanese pop culture). The theories of the origins, physical features and malevolence/benevolence of Kappa vary quite a bit, so let me describe the common and most interesting image and traits of the green water imp.

The beak-ed Kappa kinda looks like a cross between a human and a turtle, sporting big claws, a shell, a scaly hide and an optional modesty-protecting loincloth. They have a rather smart green complexion of which there is debate to whether or not it is granted to them from eating their beloved food, cucumbers. Illustrations depict Kappa with anywhere from little to a lot of body hair, but despite this variance, the head is always seen crowned with a circumference of hair which surrounds a central water reservoir referred to as a 'sara' which is the same word used for plate/dish in Japanese. Contained within the Kappa's sara is its liquid life force, appearing as water and presumably so, though, scholars love to point out that nobody is 100% certain that the composition of the liquid is water. Pfft... why hedge your bets mates? It's a freaking water imp, of course it's going to be water!

Probably one of the most interesting parts of Kappa folklore is that of the strategy of stopping or defeating a Kappa. You see, the Kappa are known to be both benevolent and malevolent, and one of their many nefarious penchants, is that of springing from the water and seizing upon anything from a person (particularly a child) through to a horse in order to drag it to a watery grave where it will have a feast of its victim's organs, Bleech!. What? A little imp dragging a horse into the water... oh yeah, by the way the Kappa apparently has exceptional strength; what a boss! Must be all that basashi*. So should you encounter a pesky Kappa, legend says that, although it kinda wants to bite your head, it can be stopped in its tracks by giving it a polite bow. You see, though a Kappa doesn't bat an eyelid at killing the innocent, it nevertheless feels honour-bound to at least reciprocally bow at its future meal before declaring itadakimasu†. And right there is its undoing, as bowing causes it to spill its precious aqueous life force onto the ground, severely weakening it, and by some accounts, cause it to make an early exit to the, ermm, pearly cucumber fields in the sky. 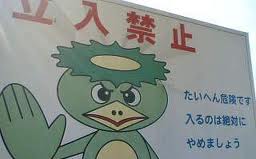 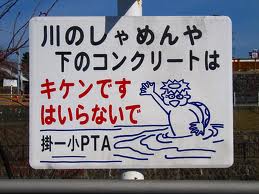 Riverside Kappa warning signs, to this day, can still be seen posted about in order to ward children away by using cartoony images of scary water imps patiently awaiting a fatal misstep by little Kenichi-kun^ or Mariko-chan^. In fact, many people think that the Kappa were created purely as a tool to scare children from getting themselves into a potential drowning situation, a theory that I am a fan of. 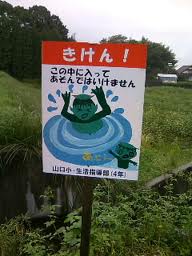 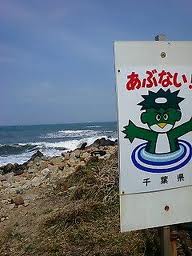 But, let's hold up for a second, poor ol' Kappa are getting quite a bad rap here.They are known to be good too. The thing is, once a Kappa is made to make a promise to reform, it will with the utmost loyalty, hold true to its promise. There are a few situations where a Kappa will promise to come good. One such situation is when bargaining for their release from their captor. Another is when they wish the safe return of a severed limb...errr what?

Well, despite their livestock-towing strength, their limbs are prone to 'being liberated.' For example, it was (or is?) not particularly weird to see a horse running home to their owner with one or more Kappa arms lodged in their thigh. Upon the sight of this, farmer-san could, in the interests of their community, keep the arm for a future bargaining session as this presents a good opportunity to turn one or more of the local Kappas away from a life of crime. The Kappa will frantically seek out its divorced arm/s in order to reattach them within the few-day long window of time its body has the ability to do so. All of a sudden, I'm thinking that the villain, Cell, from Dragon Ball Z had some partial inspiration from Kappa folklore.

Capturing Kappas is an attractive venture because you can make them do work for you as payment for their release (and retribution for eating the local swimming squad). They are skilled healers, famed for their bone setting magics and ability to produce salves. They are also put to work in the fields and one has been known to help construct a drainage system on flood-prone farming land in old Edo, a deed offered as payment to a human that saved its life years prior. This area is in the vicinity of Kappabashi in modern Tokyo.

The word Kappa abounds in the Japanese lexicon. For example, 'Gappa' (from 'Kappa') is found in the term Gappadoki/ガッパドキ which is an old term for drowning that is apparently still used in some regions of Japan. 'O-Kappa' is a Kappa-like hairstyle, 'Kappa' refers to both the old straw-made and modern plastic poncho style raincoats and Kappa Maki is a type of sushi roll containing Kappa's favourite, cucumbers!

Speaking of Kappa Maki, one of the most popular and iconic restaurants in Japan is Kappa Zushi/カッパ寿司. This chain of restaurants can be found in most Japanese cities, and of course, the flagship model of the restaurant is the cucumber sushi roll. The mascots for the restaurant, カーくん (Ka-kun) and パー子ちゃん (Pa-kochan) are a couple of cute water imps, presumably enslaved into servitude by an enterprising sushi chef.


Cutesy Kappa are now rife, seen in various pieces of merchandise, in manga, anime and video games, and of course, they are seen on this very website :D I have been personally assured that my Kanji-slinging sidekick is a vegetarian. Oh, the cucumber recipes he could tell you!!

Well there you are, the Kappa. If you are so inclined, there are many more legends about the Kappa to be found, such as the one of their fondness for sumo or their eternal hunt for the shirikodama (roughly translates to 'butt ball'..WTF). Yearrr, didn't want to write about that last one so much...

So to finish up, please enjoy some happy snaps of me and my friends when we found a Kappa out in 茶臼山 Chausuyama area, Aichi. 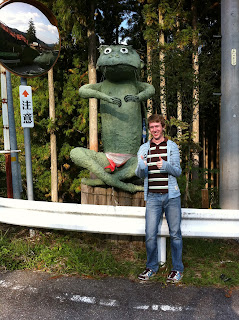 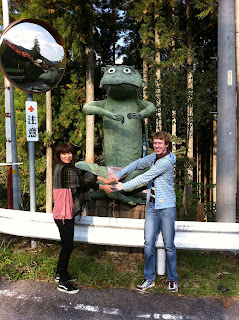 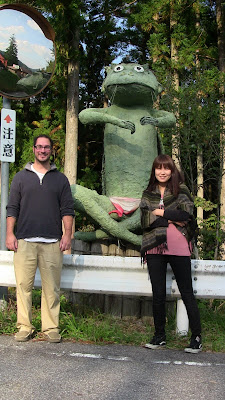