Hello all. Over the next couple of entries I will be talking a little bit about the splendid fruits that you can enjoy in Okagaki, Fukuoka. 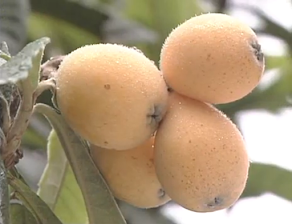 Having a temperate climate makes it ideal to cultivate a variety of popular fruits in the prefecture. I guesss it would be remiss of me to not start this entry by introducing the Biwa (loquat) first, it being the inspiration for our town mascots! So the loquat has been grown in Japan for an estimated 1000+ years, and is thought to have originated from cooler, hilly regions of China. It is a small, orange-yellow stone fruit about the size of a plum, with a slight pear-like shape. They grow in panicles and are very delicate, so it is common practice to cover the fruit with paper bags while they are still ripening on the branch. This, however, will not protect them from the clever crows of the region as many of the locals will attest, with the sight of loquat seeds on the roofs of houses being common in at least one part of town apparently, haha.

As for the eating of our town mascot, you could eat the skin and all if you wash them well enough, but most peaople peel them, which is thankfully very easy. The skin peels away beautifully and stays intact very well so it only takes a matter of seconds. You could then pop it into your mouth or cut it into pieces and eat it that way. The flesh is soft and very juicy and the flavour is very reminiscent of persimmon. You feel very refreshed after eating a couple! The brown seed/s on the inside are similarly sized to lychee seeds, though in my experience there can be multiple (2~4), sometimes fused together. Kind of strange looking!

The popular local variety is called Takakura Biwa (高倉琵琶), which I am assured is highly regarded in the loquat world, and I have cause to believe it, not only because I enjoyed eating them, but also for the fact that high end patissieres have been using them in cakes. In fact, there is a limited edition Takakura Biwa and lemon jelly shortcake available at Cafe comme ca, that looks absolutely delightful, and will set you back a whopping 1,100 yen (~USD$10) for a slice or 11,000 yen (~USD$100) for the whole cake! Very luxurious. 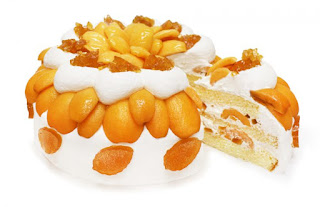 Apart from the fruit, the leaves of the loquat plant are also used in making tea! It is supposed to be really healthy for you. From what I have heard though, the tea product you can buy off the shelf is not particularly tasty, though preparing some from freshly harvested leaves improves its flavour significantly. 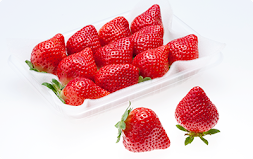 Amaou strawberry
A variety of strawberry known as "Amaou", which is produced only in Fukuoka prefecture, is extremely well regarded and is well-known throughout the country and overseas. Amaou are a lovely red colour with a healthy sheen, are plump, and due to them being raised in colder seasons, ripen slower giving them a long time to store energy, aka delicious sugars, to produce a beautifully sweet and flavourful fruit. In fact, the Amaou variety holds a Guiness World Record for being the world's heaviest strawberry!

According to my English conversation students (average age 60~70), local strawberries were not always cultivated at these times of the year and this is a relatively modern practice, which struck a chord with me, because I always thought (in Australia at least) that strawberries were produced in the warmer months! There are a number of local growers in Okagaki and I always look forward to the winter/spring season when I can buy them on the same day they are harvested while they are at their best. You should eat them within 2-3 days, which I don't think will be a problem for anyone that enjoys strawberries as much as myself!

In the next entry I will tell you about the famous Kyoho grapes, which are raised in an interesting way in Okagaki! Please look forward to it!