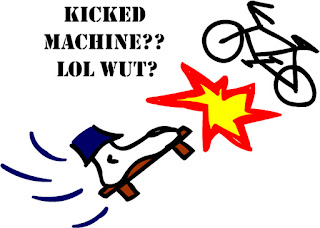 For some reason, the Japanese have (at least) 3 different ways to say bicycle, all interesting in their own way. The first way to say bicycle is 自転車・じてんしゃ・jiten-sha. The first part of the word, as I read it, comprises 自転 which means rotation on an axis. The last part, 車, represents vehicle. So it may mean "rotation-on-an-axis vehicle." The other way I could read it is by considering the 3 elements separately; 自(self), 転 (turning around), 車 (vehicle) giving "self-turn/ing-vehicle." Personally I prefer the second explanation as it sounds so logical.

The other two names for bicycle made me laugh when I first heard them, showcasing the humour found in the nomenclature of some Japanese words/expressions. The first is the name for the very common bike that has the¯\_-_/¯ のような handlebars (and often sports a smart-looking basket on the front). It is named "ママチャリ" which is composed of "mama" and "bike." A common misconception amongst learners of Japanese is that チャリ is derived from the borrow/外来 word チャリオット・chariot. チャリ actually comes from ちゃりんこ (a word that is interesting enough in itself and worthy of a different installation of "mini Japanese lesson"). This misconception has however opened up a hilarious vision/mnemonic that a few of us have been using. It gives us "Mama's Chariot," you know, the bike that mothers go out and do their errands (用事・you-ji) on. Haha.

The last name I have for you is ケッタマシーン・ketta-mashiin・"kicked-machine". I have been told that this is an expression used in Nagoya. It has purportedly been used since around about the late 60s and the term may not often be used anymore (Japanese source: http://oshiete.goo.ne.jp/qa/90451.html ). I would love to know in which spirit this name was actualised. I fervently hope it was a drunken coining at the meeting of a particularly genius brains trust.

Next time you tell your Japanese friend that you are "going by bike", which term will you use?